A little less than a year ago a phone call out of the blue turned me on to a bit of Georgia history I had never heard of. The city of Jackson, Georgia, wanted to know how to save their 1925 Hawkes Library. Hawkes Library? I made confirming noises like I understood while my fingers started in on google. What I learned lead me deep into the annals of American values in the Gilded Age, philanthropy, and social philosophical ideals. But it started with a man named Albert King Hawkes.

Albert King Hawkes was an optometrist, inventor, and philanthropist. He was born in 1848 in Massachusetts but settled in Atlanta in 1886 and began an optical company which would become nationally known. Possibly partly because he didn’t have a family to pass his wealth on to Hawkes followed in the philanthropical footsteps of the wealthy benefactors from the Gilded Age (late 1800s) before him. According to one Hawkes Library National Register nomination:

“His donations were attributed to his interest in “sociological conditions” and in giving where it could most benefit society. He founded the Georgia Training School for Girls with a $10,000 donation as well as the land… He donated to various colleges, and a dormitory is named for him at LaGrange College. He provided for over-aged Methodist ministers, as well as Methodist orphans.”

Georgia’s Carnegie Libraries, past and present

As America industrialized after the Civil War, waves of social reform also swept the nation. Besides libraries, this era saw a huge push for public schools, prison reform, housing services and the roots of the temperance movement. Much of the development in the way of public libraries was due to the philanthropy of Andrew Carnegie who had raised himself from the slums of Pittsburgh to become the richest man in the world through his steel industry businesses. In line with the social reformers of his day, Carnegie believed in social institutions’ ability to reform society, and in the wealthy few’s duty as benefactors. He considered the library in particular a strong influence on the “meritocratic nature” of America and thus a wise investment in order, stability, and sound economic growth.

From 1883 to 1916, Carnegie provided the funds for 2,811 libraries around the world. According to a PBS American Experience program, “Ordering a library from Carnegie was as easy as ordering a sofa from the Sears Catalog.” Step one was to submit a request in writing. Step two involved identifying a site. Step three identify matching funds for maintenance.

In Georgia, 29 total Carnegie libraries were built, 5 at institutions of higher learning.

Mr. Albert K. Hawkes apparently felt he could provide for society in a similar manner. By the early 20th century the public library was evolving as new services to address the needs of the “common man” were coming to the fore. Hawkes’ specification that the libraries be oriented toward children was a result of these new ways of thinking. In addition, and possibly due to his visual or simply technological savvy background, Hawkes wanted libraries to incorporate moving picture facilities as well. 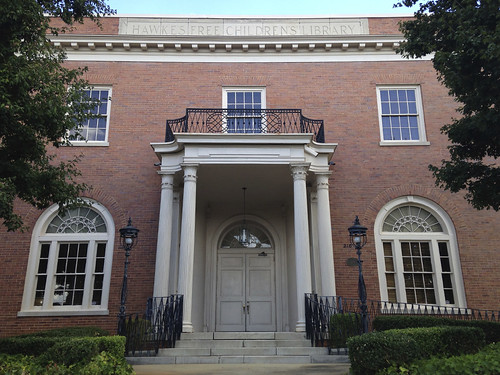 HAWKES’ LIBRARIES
The first discussions between the city of Griffin began in 1913 and the Griffin Hawkes Children’s Library officially opened in November of 1916. Though he had donated previously to libraries in Grantville, Roswell, and possibly other Georgia towns, the Griffin library was Hawkes’ first large-scale experiment in providing both literary and motion picture facilities. If it worked he planned to fund other children’s libraries around the state. Unfortunately, Albert K. Hawkes died in 1916 just as the Griffin library was opened. His will, however, provided $7,500 in funds for libraries in a short list of towns. Hawkes libraries in Cedartown (1921), West Point (1922), and Jackson (1925) were built as those cities raised the additional funds for construction and materials.

Although no specification from Hawkes is known, Hawkes’ libraries, like Carnegie’s were Classically styled and beautifully done. All but one of the libraries is attributed the Atlanta architectural firm Hentz, Reid and Adler and Neel Reid himself. Robert and Co. is the architect listed for the West Point library.

Despite being called a children’s library, the Griffin library and the others after it, served adults too as these were the only public libraries in town and served most towns into the 1970s or later.

The Hawkes Library in West Point is the only one still operating as a library today.

By the way, the update on the library in Jackson? On the brink of demolition the city managed to stall the county and purchase the building. Today it has a new roof and a committee is being established to oversee the building’s rehabilitation.

This entry was posted on Thursday, January 15th, 2015 at 22:18 and tagged with georgia history, preservation and posted in georgia roads, historic pres. You can follow any responses to this entry through the RSS 2.0 feed.
« the many incarnations of Underground Atlanta
the vintage bathroom »