on streetcar vs. bicycle

The Atlanta Streetcar is ALMOST HERE. That is to say of course, it is here, it’s been here, the boarding platforms are complete and the tracks are all down, we know, because we bike and, well >>

Our friend K I’m sure is not the first one whose bicycle has run afoul of the new streetcar tracks, but she can tell you from experience that it ain’t pretty she’s lucky the most un-pretty it got for her was a big blood blister leading to a very nasty bruise on her thigh.

So naturally there’s been some discussion, inevitable disgruntlements, complaints and dire predictions of lawsuits and doomsday to come thanks to “poor planning.”

I looked into a few other city’s streetcar vs. bike experiences to get some perspective and came up with a number of lawsuits primarily in Seattle where the plaintiffs seemed primarily to be arguing “poor design” or lack of design for bicyclists. In these cases there was no separate bicycle lane or, in a recent issue, the bicycle lane was blocked by pedestrians getting on the streetcar resulting in a decision by the cyclist to enter the roadway where she wiped out on the tracks. One Seattle author asked, what do cyclists seek to gain with these lawsuits? and her point is valid.

My concern is that while bikes are a crucial piece of the transit puzzle, so too is public transportation, and I’m not sure how much good can come of one form of alternative transportation getting mad at another in a city that’s struggling (but really trying) to get out automobile gridlock. There will always be transportation choices, there need to be, so for our transit to work all modes have to coexist.

Coexisting usually means following the rules and here’s the way to do it in Atlanta. DO NOT RIDE ON THE SAME SIDE AS THE STREETCAR! In Atlanta, since streetcar traffic goes east on Edgewood and west on Auburn, bicycle traffic does the opposite and to reinforce the plan, bicycle lanes, sharrows, and signage only exist on the recommended riding areas so that cyclists are not at all encouraged to ride alongside the rails. In fact I think the handy signs above were recently installed.

Granted, we cyclists, hovering in a lovely free zone between vehicular and pedestrian traffic, are hard to discourage. But this is serious, tracks are hazards, but they are known hazards and you don’t wanna tangle with em, K can tell you.

Yours truly, following the rules on Auburn Ave.

Months ago, back when spring was still cool in the mornings, me, N and fellow cyclist, A, met up with BRAG (Bike Ride Across Georgia organization) for one day of the Spring Tune-up Ride. The three of us weren’t making a day of it, so we took the 32-mile route, which, in different publications could’ve actually been 35 or 42 or 45 miles. The distance ultimately proved to be in the low 40s dependent on how many detours (or “attempted shortcuts”) you took, and how long down said shortcuts you had to chase your girlfriend until she turned around.

It only added a mile probably.

The ride was great, we started early enough that I was chilly the whole way in my new jersey and shorts. A. was eager to plow through til the end and eventually he did, I preferred to stop at all the rest stops (they are rightly known for their PB&Js) and at anything else interesting especially if it was halfway up a hill, N fell somewhere in between, looping back or waiting til I caught up. Since most of the riders were putting in 60-miles over the course of the day, our route split from most everyone else after Rutledge and we were mostly alone in the beautiful Morgan County (et al) countryside.

Before Rutledge however, we rode through the crossroads community of Fairplay where I noticed a big house just beyond the main intersection, for a moment I wished I’d detoured but then, as I glanced back to see if it was still in sight I was struck by the sight of these 2 giant monuments sitting almost on the road bank. 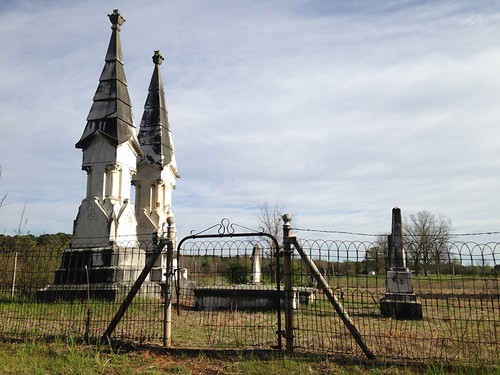 N and A were far ahead, I skidded to a halt and climbed up to the cemetery. “PONDER” it said on the monuments and my mind gleefully leapt to Eudora Welty’s The Ponder Heart. 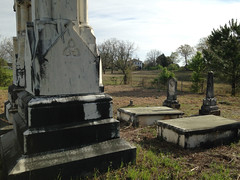 The Ponder family cemetery lay straight back from the house which was in plain view across the long field. These 15-foot-tall monuments, the headstones of George F. and Sarah Ann Ponder, would never have been out of sight. George’s father, John H. Ponder built the house in Morgan County around 1850 and it would remain the economic center of the community for decades more as the plantation system converted to sharecropping after the Civil War. Based on slave-holding census records (referenced here), the Ponders were among the wealthiest landowners in Morgan County at that time and though the family’s means must have been somewhat diminished after the war, George obviously wanted to make sure people remembered the family’s prominence when he and his wife died in the 1890s.

I lingered there a little while before my thoughts returned to the task at hand and I pedaled on toward Rutledge. 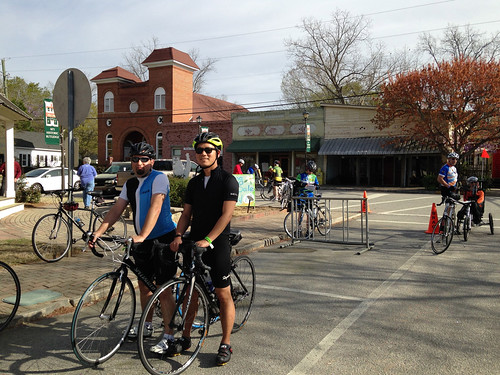 A and N at a brag rest stop in downtown Rutledge, this was the last we’d see of A for a while

I was biking to work on the beltline the other day and thinking of my siblings, in faraway places like Mississippi and California and how they don’t even know about the cool stuff I experience everyday, things that I just take for granted, like this dang BELTLINE! So I pulled my phone from my back jacket pocket (bike gear, yeah, gotta say, the pocket in the back is nice) and carefully snapped a few pictures. I stopped for some of them.

Seriously guys, this beltline is a big deal. 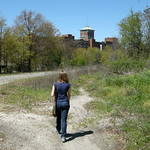 When I first heard of the Beltline, 3 or 4 years ago, it was just starting to become a reality. Though the eastside trail was still rocky (track ballast that’s called), and impossible to bike, it was regularly jogged by local residents. I eagerly read everything I could get my hands on about this idealistic trail that would connect a circle of intown Atlanta. I wrote a research paper (a short one mind you) and took lots of hikes mainly in search of graffiti-filled spaces just beyond the public’s eye, and I too dreamed of the day when my bike could take me from my home in East Atlanta to work in midtown, all the way west to the quarry, or, well, anywhere. Riding on a [paved] railroad bed is SO EASY, and riding across town on Atlanta’s hills and potholed streets is not.

In the intervening years I moved one neighborhood closer (to Reynoldstown) and the Eastside Trail was completed, connecting Inman Park directly with Piedmont Park. With a little not-too-difficult-at-all street riding on either end of my trip I now commute to work on the beltline.

The ride itself is lovely ESPECIALLY in the morning, by the time I’ve biked through my neighborhood, the infamous Krog Tunnel, past the developing Atlanta Stove Works complex to the beltline trailhead everything about the morning is great. Traffic is tight on the streets but as I turn right onto the beltline I am warmed up and can relax into the ride.

And while we’re talking about Awesome Atlanta, I get to ride past the 2nd most up and coming happening thing in this city and the world—Ponce City Market—and check on the progress. I see what’s happening in Piedmont Park, or along Peachtree and then I’m there, properly sweaty and breathing hard I duck into a bathroom de-helmetize my hair, change shirts, and reapply deodorant. Minor drawbacks to bike commuting.

It’s a dream come true, one of those awesome amazing ideas that actually happened—is happening, and is only getting better with every step forward.