We were in Cartersville a few weekends ago for the Spring Ramble, J and I were rambling, wandering the rooms of the incredible long-since rehabbed and way out of our league houses on tour when we spotted a sign “Open House” with balloons that was clearly not on OUR open house trail. To be fair, a lot of Georgia Trust Ramblers noticed it, house enthusiasts always get their curiosity piqued by something a little off the beaten path. Not that this was so crazy, i mean, it was a realtor’s open house, they KNEW what they were doing taking advantage of all these house tourists going by. J and I popped in.

The house came with 4 acres which swept down to one of Cartersville’s main roads, which helps make sense of the nearly $1/2 million price tag. The house itself was big and a curiosity indeed. Originally an ornate, wood-frame Victorian house, it had received a false brick facade (probably in the 1960-70s) and a few rear additions whilst being chopped up into apartments (no later than the 1980s). Bathrooms were crammed into closets and the butler’s pantry (fortunately some builtins were still there!), cheap paneling covered the interior walls in small back rooms, rental-property tile on the floor of a plain vintage kitchen that felt like it belonged to another house entirely and beautiful hex bathroom tiles served to block off a former fireplace. Most of the house though, besides the obvious adjustments for boarders, was airy and filled with light. The realtor folks positioned themselves well on a side screen porch, so that when entering you straight through 3 rooms, each in tones of gray and white and filled with diffused daylight that showed off the elegant Victorian details of the molding. It was so peaceful with no one else there. 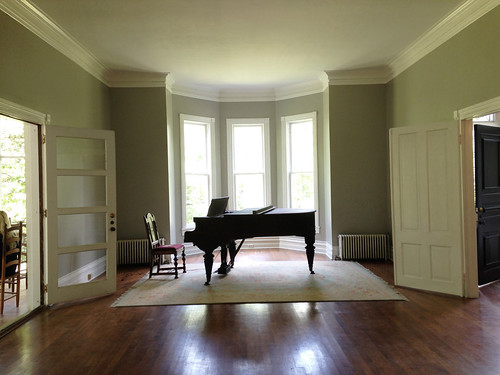 The elegant staircase was ‘boxed in’ with rails possibly because the railing was not to code height when it became apartments. Original doors, windows and mantles existed throughout contrasting with the 1970s back rooms (downstairs) and bathrooms also scattered throughout.

Like good preservationists, J and I talked our way through working out the story of the house as we went, the addition of the brick facade (“de rigueur” or to avoid maintaining the wood siding? was the wood siding underneath? the bay window??), the kitchen practically detached, the bathrooms and bedrooms and the tenants that used them…

Upstairs, curiosities in each room seemed staged to make one’s imagination run wild with more—kind of creepy—details from the past: a rocking horse like I remember as a kid in the 80s, a teapot on an antique ironing board, an old baby buggy from the house’s earliest days(?), and a handmade child’s toy wagon. For there have got to be stories, and if not, we’ll make them up. 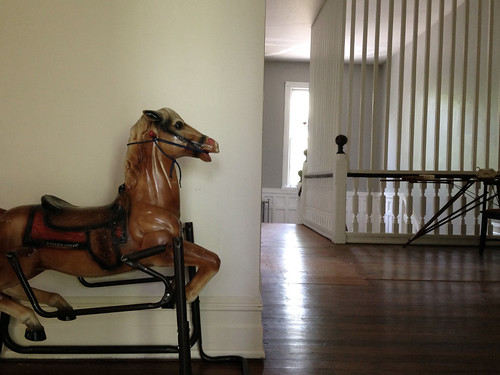 You would think i’d’ve had a chance to write about Valley View by now but no such space of time has presented itself, so for now i will just post this, cause i know you want to know what they hell i am doing in school, and especially on those saturdays i’ve spent up in Cartersville and come back glowing with excitement from. It’s partly the crisp cool autumn air of north Georgia, but also the discovery of this house inspection, in this case, going around the exterior with H, peering in cracks while taking [very important] measurements of exterior elements. You can tell it makes me happy right?