“Unpacking” my own Manuel’s Tavern

Mom had never been to Manuel’s Tavern. Or Man-WELL’s as she insisted on pronouncing it, possibly correctly. For the brief period that she and Dad lived in Atlanta she knew of it but never actually went. Dad, a Georgia Tech graduate, was familiar enough with Manuel’s to stop by on his bike on the way home from work on Fridays to pick up a quart of beer (in a milk carton?!) for him and mom to share in their new old house in Candler Park. (I picture them sitting on the front steps watching neighbors pass by or leaning against a wall in a bare room on halfway refinished floors.) It was the 1970s and the 20-year-old Manuel’s was already an acclaimed institution. I can only wonder that Dad never took her there–I guess there was always next time. Nearly 40 years later, Mom confessed this to us when she and P came over for a wedding in November of last year. There wasn’t going to be another “next time” so after the wedding on a cold Saturday night, we got a ride to Manuel’s for a late night beer. It was nearly midnight when we breezed in the back door in our wedding clothes and slipped happily into one of the wooden booths by the bar.

I never lived close enough for Manuel’s to become my own go-to bar, but I have known it since my days in Athens and later living in Atlanta. Squeezing into the packed bar on a weekend night was daunting, finding a spot to sit at Carapace required planning ahead, but there were less crowded weeknight meals of chickens sandwiches or casual gatherings in the Eagle’s Nest. And there was always plenty of beer. To me as to most anyone who went there, Manuel’s, despite the layer of grime that every dive bar has, always exuded a special sense of place that was hard not to respect.

As most everyone knows now, Manuel’s is undergoing renovations and a massive development of the surrounding land- and possibly overhead air-space. They closed on December 27, 2015, but promise to reopen, bolstered for a new generation. Thanks to rather incredible documentary project they say the interior will boast the same finishes, wooden booths, bar and, much to most folks’ skepticism, the same photos and stickers, pennants and memorabilia on the wall in the exact same places. At least, they say they CAN recreate it, I’m not really sure they’ve promised to. 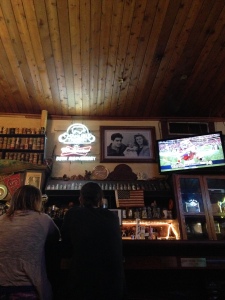 The project to preserve what amounts to a “harbor of memories in an ever-changing city” is being carried out in a [mostly] Georgia State University project called “Unpacking Manuel’s Tavern.” A recent article in GSU magazine goes in-depth on the project, an awesome piece of digital preservation, a collection of histories and memories that anyone will be able to “walk through” and, as they say “unpack.”

So while my own unpacking of Manuel’s will go unrecorded (besides here) if you follow there facebook page you’ll find a few other memories, people are eager to share and I’m sure I’m not alone when I say I’ll be looking forward to the “Unpacking” project’s release as much as to the reopening of Man-WELL’s. 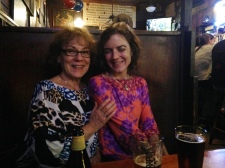