Last week was a tough week for historic buildings in my sphere. It began with the dramatic Sunday morning demolition of the c.1963 Georgia State Archives building downtown. But early in the week a neighbor and I noticed a team removing asbestos siding from a cute yellow house at 456 Candler Park Drive. On Thursday the bulldozer arrived and it was half gone by lunch time when I biked past on my way home. As I turned up Brooks, a bulldozer had finally been delivered to 351 Brooks, a house whose fate we neighbors have known and dreaded for some time. Friday was the day. 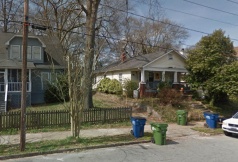 As I write this, the sound of bulldozers still scraping the lot where M once lived and the ring of hammers just behind on Clifton (where an adorable green duplex stood until this January) are clawing at my soul. I’ve already told my neighbors they better not sell their houses. ever. because I can’t handle this happening right next door to me. I know my down-the-street neighbors feel the same way and wish they could’ve stopped this.