In horrible terrible no good very bad preservation news for the day, the Hancock County Courthouse burned to the ground in the wee hours of the morning.

I’ve written about Sparta a couple times over the years, thanks to work at the Trust, Sparta is one of the small towns in Georgia that I know best. In my opinion it is one of the best small towns in Georgia but that is an extremely personal opinion, you might have to be as intimately acquainted with a place like Macon, Miss., as I am to feel drawn to a place like Sparta. It’s a unique town too though, chock full of exquisite architectural examples from simple cottages on the back roads to antebellum townhomes of wealthy planters to the high-style arts and crafts former girl’s school on Maiden Lane. The high-style Italianate courthouse at the center of town was no exception.

No elaboration was spared on this courthouse which I think was one of the prettiest in the state. Though it may be the poorest county in the state, one could say that thanks to that and the severe decline of the population of Hancock County (from a peak of nearly 20,000 in 1910 to a declining 9,429 in 2010), expanding government over the 20th century didn’t actually take up more space in the courthouse and the relatively small 1881 building was still able to serve for all of Hancock County’s business and operations. The poverty of the county kept the courthouse relatively unchanged—besides some thin carpet added to the offices in the 60s or 70s and a cinderblock bathroom built under the west stair—it felt like one was stepping back in time. 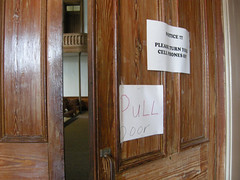 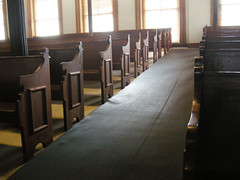 It just so happened that I was traveling to Eatonton today, just 30 minutes from Sparta. My heart was heavy with dread as I took the road out of that town that pointed to Sparta, but I couldn’t stay away. I wanted to get it over with. It was close to 5:00 when I arrived, pulling into town on 16 and instead of the clock tower rising up ahead of me crowning the hill of town, there was a smudge between the trees of the courthouse square. The building was still smoldering and ash and smoke blew this way and that from the building, acrid in your nostrils. I didn’t see anyone I knew but several other people parked and walked up too, all the way around, one mother and her daughter who looked as near to tears as I was, a man and his 3 children, and more locals like the mechanics next door and workers in yellow vests who’d been there all day. We all looked at each other and said what a shame it was. How very sad. We refrained from shoulder crying.

Most of the brick walls were intact, but nothing else was, it was a brick shell, all of the wood, the doors, the plaster, the glass, were incinerated, even the iron rail of the false balcony was even mangled and twisted on the ground. There was no one to stop you from going too close, but news crews and workers seemed to be eyeing you. A cavalcade of masonry units that must’ve spilled out of the doors to the street when the clock tower fell in lay outside the yellow tape. I grabbed a good brick from the pile and went on my way.

This entry was posted on Monday, August 11th, 2014 at 23:35 and tagged with courthouse, fire, lost, ruin, sparta and posted in georgia roads, historic pres, totally shabby. You can follow any responses to this entry through the RSS 2.0 feed.
« the Crypt of Civilization
the streetcar in motion »