I’ve been a little obsessed with houses lately.

A few weeks ago I stumbled on a nytimes article, Small Developers, Big Dreams and it really hit home with me—young people buying foreclosed properties at auction, rehabbing them on a budget (their own labor primarily) and renting/selling them. That same week I visited my cousin in San Antonio where I was introduced to Rehab Addict, the first HGTV show I’ve ever seen that really speaks to me. I was itching to begin rehabbing some houses, revitalizing a neighborhood, but why was this so important??

One reason of course is that I want to get my hands dirty, but aside from that:

Houses make up a neighborhood, a community. These 1920s bungalows, the late-19th century gable end cottages, the fancier Victorians, or even the American Small houses and ranch houses from the mid-20th century, their rhythm on the street gives our neighborhoods a sense of being, gives the residents a sense of place, they tell where this neighborhood came from, who was here and how it was developed. In them you might see the story of bygone days of prosperity or vice versa, the houses themselves remind us of what once was or what it could be again. 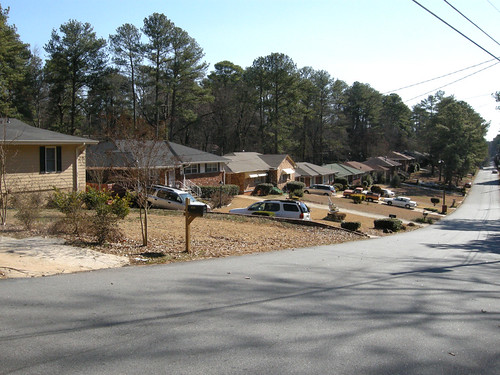 The architecture of the neighborhood often engenders the spirit of the community. The small lots and houses typical in lower and middle-income historic neighborhoods practically force neighborliness and promote foot traffic in the streets while the sweeping lawns of many ranch house neighborhoods were designed specifically to put distance between the house and the street cater to automobiles while the long winding streets go so far as to make walking downright impractical. More space between houses discourages neighborly interaction as do “closed front” houses. Think about garages front and center or houses with few windows on the street, this kind of architecture can be downright intimidating.

Before the age of the automobile, neighborhoods were generally built on this principle, houses and their occupants were oriented to their street and their community, this is the problem with a lot of infill development today, big new houses outsize their older neighbors, when you get enough of the big new infill, the historic houses are isolated and undesirable. Do you want that cute little bungalow that is now wedged in the shadows of 2 monstrosities that take up the maximum amount of space on their lot? not really.

This is why I am so enamored with the idea of fixing up historic houses of this sort in neighborhoods that need the love, and why, apparently, a few other people are too. While many developers see these old houses as tear-downs and an opportunity to put up some max-square-foot house that gentrifiers will pay a pretty penny for in this ideal location (historic neighborhoods are also better situated for transportation and, in Atlanta’s case, the absolutely hopping beltline), the more preservation or sustainable or community-minded of us see the potential in a home that is already there, because it is more than just one house, it’s about a whole street, a community.

This entry was posted on Wednesday, March 26th, 2014 at 15:00 and posted in historic pres, not too shabby. You can follow any responses to this entry through the RSS 2.0 feed.
« more Mixed Use
on what it’s like living the dream »