I can’t claim that one, N came up with it. It was over breakfast at a posh Caribbean resort, we were reading the provided NYTimes daily digest and there it was, major national news that our hometown baseball team was abandoning us for the burbs. But Marietta Crackers is great, striking so many nerves in one swift blow—racism, elitism, AND it’s historical! Not that I have much against Marietta, it’s not a suburb in fact but a historic town in its own right, but the name works well with in-town bias. Another suggestion floating on fbook has been the Cobb Commuters, more descriptive but lacking the ring. Maybe the Cobb County Crackers would be better. yeah, i like it. 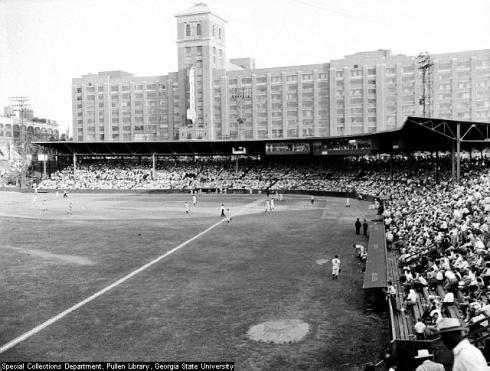 Moving on, cause this is serious. There are a lot of good points, and bad. A lot of things we’ve gotten emotional about in the last few days and biasedly overlooked. I am not the expert so I’m not going to write my own spiel but I’ll lead you to some excellent articles on the subject and a few kicking quotes:

This rings true with me on so many levels, the decision on the surface and even deeper seems like something the team would’ve made in the mid-60s when everyone was leaving the inner city (oh, but 1966 was the year the Braves first moved to Atlanta), or the mid-1990s which seems like a boom time for development all over the metro Atlanta area (but the Olympics came to town and Turner, naturally, got the Braves a new stadium next to the old one). So it comes in 2013, the economy’s picking up and money is the primary motivating factor (they say it’s their fans but really, come on, do YOU believe that?).

If I was a commuter from Marietta I’d be raising a stink, I think I’d just have to sleep in the office on game days because there’s no way in hell I’d get home, perhaps if MARTA went to Marietta (or Cobb at all, hello Cobb?) I could take it as an alternative to or around the game. So what ARE Mariettans saying?
• “Traffic and Economics biggest hurdles to Braves’ success”

Meanwhile, writers for the Saporta Report are doing their best to get the whole story, there are lots of good reads here:
• “Traffic, transit access to stadium near Cumberland Mall may be less a nightmare than some predict”
• “What it would have taken for Atlanta to keep the Braves at Turner Field”
and this new take which just gives us something else to be mad about:
• “Egbert Perry: Atlanta Braves did not consider GM site in Doraville

but I’ll leave you with this note, the deal is NOT QUITE DONE, there is business to done and before everyone gets excited, Jay Bookman has some wise words:
• “On Braves deal, Cobb officials act like they have something to hide”

This entry was posted on Thursday, November 14th, 2013 at 15:15 and tagged with baseball, braves, sports and posted in ATL life. You can follow any responses to this entry through the RSS 2.0 feed.
« resuscitating the Rhodes Theatre for the weekend
kitsch, preservation and good food »