Times they are a’changin’. Well, really nothing about TIME is a’changin’, Atlanta’s doing what she’s always done, we’ve had a bit of reprieve thanks to the down economy and perhaps that’s why the swath of demolitions is suddenly so noticeable, but the streetscapes in midtown are certainly changing, again. A few months ago I took a nice stroll around midtown Atlanta, from Rhodes Hall down Spring, and down the ‘teenth streets all the way to Crescent. I discovered a couple historic residences i didn’t know exited, including the Castle on 15th, and I later learned it’s renown in annals of Atlanta preservation. I found Front Page News midtown houses in a chopped up old house and neighboring restaurants the same, a half intact residential block nestled among skyscrapers—rockin! I found a creepy old residence, converted to restaurant, hair salon, and a jumble of other possible retail activity before being abandoned behind it’s old magnolia and encroaching tropical plants. This house is coming down today. They’ve already torn out the mid-section and I imagine i can hear the beeping of bulldozers in reverse even from here at Rhodes Hall. Sad, but who was going to fight for this mangled old midtown building, once home to Atlanta lives long-forgotten? And that magnolia, it would’ve had to go, although I think there is some Southern biblical thing about not cutting down the magnolia grandiflora.

Sadder maybe is what demolition means for the evolution of an area. Lunch the other day found us on Crescent Ave NE, which used to look like the screenshot below. Front Page News is still holding it’s own but that adorable green house was already half gone, making room for something new that will maximize land-use profitability on the corner. However, with land being cleared for another new construction one block back, you have to wonder what this spells out for the rest of that enclave of low-story and mostly residential structures tucked so poetically among the highrises. Diversity is disappearing, you can bet whatever goes up next will not be bright green and cloaked come spring in purple wisteria. Diversity is beautiful. 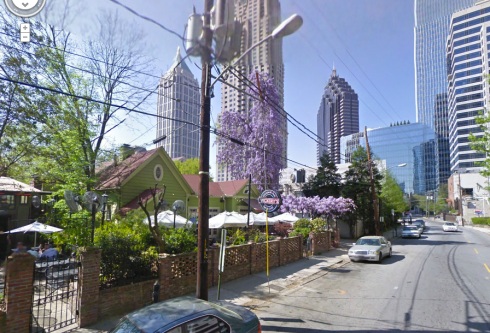 This entry was posted on Thursday, February 9th, 2012 at 12:51 and tagged with atlanta, city, demolition, midtown and posted in ATL life, historic pres. You can follow any responses to this entry through the RSS 2.0 feed.
« losing role models
too many counties »